Bhutan Cordyceps (Yartsa Goenbub) is an annual harvest that matures between May to July of the year. Every year, in late June, licensed Bhutanese farmers will ascend the sacred mountains in the regions of Paro, Wangduephodrang, Gasa, Lhuntse, Trashigang, Trashiyangtse, and Bumthang in search of Cordyceps. After collections, all Bhutanese farmers will convene in a bidding session to determine the value of their harvest. Various measures are put in place to restrict the overall harvest, including a ban on collection except during the months of mid-May to mid- June.

Managing Cordyceps harvesting has proved to be extremely difficult because the high alpine areas are very remote with major collection areas near the border of the Tibetan Autonomous Region of China. Cordyceps collectors have to climb the highest mountains in the cold, snowy winter. After spending several nights in the way, they reach the place where they can harvest cordyceps. Temperatures will be in negative. As there won't be any shops in those locations, they have to carry everything that they need during their stay. Some people suffer from altitude sickness, and there are also many cases of accidents, including death. 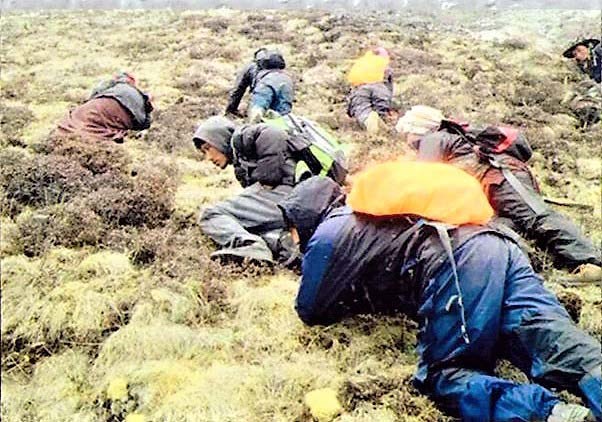 The habitat of Cordyceps is in the high alpine areas of the national parks. Near the border of Tibetan Autonomous Region of China, conservation for the Cordyceps species has always been a significant problem due to the inadequate number of forest personnel in those areas, making it difficult to monitor illegal harvesting.

Many of the harvest sites in Bhutan are near the border areas of Tibetan Plateau, which makes it easier for the people from the other side of the border to collect Cordyceps illegally in Bhutan.

It was on June 17, 2004, a royal command by His Majesty the King, lift the sanction, allowing one member from each Bhutanese household to harvest the Yartsa Goenbub (Cordyceps Sinensis).

In 2008, the Bhutan Government improvised the only one member from each family sanction, allowing anyone from family to collect.

Due to over-harvesting and inflated price, in 2009, the Bhutan Government imposed a new set of rule, restricting only three members of each household for harvesting.

On top of the restriction, all licensed farmers have to pay a Royalty charge of 10 per cent from their export earnings.